Yesterday I walked home with my kindergarten nephew G after school. He was telling me about his day (both real and imagined, that’s how he is) then stopped and asked, “Do you know the song ‘Follow the Drinking Gourd’?”

I told him I did, and he proceeded to tell me about it. His class had read the picture book and they were singing it in school. Through his snack, he kept asking me questions: Which side were the good guys? Did brother fight brother? What were slaves? Were there slaves in Vermont? Why didn’t the slaves fight their masters? 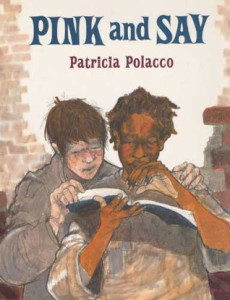 I had a copy of Pink and Say by Patricia Polacco, so we read it. It took us almost an hour. “Wait,” he would say. “I have a question.” He had lots. Why didn’t Pink’s mother follow the drinking gourd? Why was it against the law to learn to read? Why? Why? Why?

At the end of the book, I read the closing words that ask the reader to say Pink’s name before shutting the book and vow to remember him.

I wasn’t sure what he wanted me to do. We needed to say Pink’s name and remember him. But I stood up next to him.

“Let’s do it together,” he said. He stood up as tall as a five-year-old can. We said “Pink” together, and with one arm in front and one arm in back, he took a deep bow.

He will remember Pink.